Posted at 20:27h in G4 Newsletters by Carlos La Hoz Daniels 0 Comments
1 Like

How Do We Decide

Each quarter the Daniels Foundation receives approximately 25 grant applications. Grantees submit their requests through our online portal, which is a well-established grant-making software package called Foundant. Existing organization have their critical information stored with us, and new applicants go through a simple process to establish their account.

One of the nice features of the Foundant system is that it ties into GuideStar, which allows us to accomplish a quick check on the legitimacy of any applicant. So long as the organization is a 501c(3) and is not flagged for some reason, we add them to the database.

Foundant tracks all of an organization’s applications and all of our correspondence with them over time. With longstanding relationships this can be useful, especially if their mission is evolving or something unusual is required of us or by the Board.

Every Board member reviews each of the applications in the quarterly packet. Foundant allows us to design the evaluation process we follow, and in typical form we have adopted a very simple approach. Each Board members ranks the proposal on a scale of 1-9, suggests how much they believe should be granted (if anything), and has a chance to offer comments about the application.

The rankings are tallied and averaged, so that at the time of the meeting we work from the most favored applications downward to the least favored application. We do this because we never have enough money to fund all of the requests; the ranking system gives us a quantified sense of where the Board stands on the application. Board members can also review the comments made by any other Board member for the grant in question.

Speaking for myself, I have a little process that I go through when I review an application. Certainly I want to understand how the money will be spent and that the expenditure makes common sense. I also go to the financial section of the application (most often their last year’s operating results and occasionally a 990 statement). I look to see whether their financial operations seem stable, and I also look to see whether donations to the organization are stable or growing. With this insight, I then go back to the narrative to finalize my recommendation.

Occasionally we have a need to take on some additional research. In most cases David Nicholson handles this, as he is our local relationship manager in the Worcester area. We postpone a decision on the grant until the next meeting, when David makes his report.

And that’s how we decide!

It had to be 1952, Mother made a huge commotion, cleaning the house spotlessly, doing what not in the kitchen and making my sister, Sarah, and I dress in these ridiculously fancy outfits we had worn for a formal photo session that had happened a few months before. It was announced to us the Uncle Clarence and Aunt Janet were coming for afternoon tea. I was 2 and Sarah was 4.

Sarah and I thought the name Clarence was a whole lot like Clarabell, who was a clown on our favorite TV show…   so we ran around the house laughing and yelling Clarabell Clarabell…    A kind of Bettlejuice, Bettlejuice moment for my mother, then a demure 32 year old fifties-era housewife. Pretty sure that didn’t go over very well because I have only the memory of running around and no memory of the visit.

Clarence White Daniels was my grandfather’s older brother, and Aunt Janet M. Wellman was his wife.  Janet was born in Cleveland and shortly after she finished college she met Clarence. Janet’s father was Frank Wellman, a business associate of Fred Harris Daniels. Presumably that is how a Worcester boy meets a Cleveland girl.  They married right out of college in 1910. For three years they lived in Montana, where Janet gave birth to their first child, Norman, in 1911. And a year later, Jeanne was born.

1913 saw Janet move with her family to Worcester where they would live for the rest of their lives. Janet raised the children and oversaw the running of a spacious house on Metcalf Street and a farm known as Stony Farm on Salisbury Street on the Holden line where they kept horses, the children became avid riders and they grew the eggplant that was served fried at the Worcester Club for decades.

We don’t know how Aunt Janet handled the death of Norman in 1916 at the age of 5. And then the death of Myron who was born in 1918 and did not see his first birthday. But she is listed in the 1916 Annual Report of Worcester Children’s Society and the 1923 Memorial Hospital Annual Report. From this we can deduce that she knew the value of philanthropy and had sensitivity to social issues. 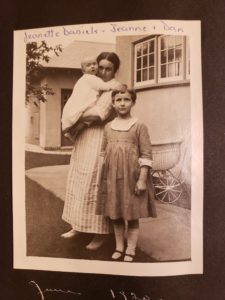 (Pictured Above: Janet Daniels with Jeanne and Dan)

(Pictured Above: Janet with Norman)

Mother told me that while she was growing up, once a month or so, they would go to dinner at Aunt Janet’s house. Aunt Janet would host all the family: the Harold and Dwight Daniels clans would gather on Metcalf St. a house designed and built by Clarence, across the street from her mother in law, Sarah Lydia Daniels, for drinks and dinners.

Tragedy struck again in 1950 when Priscilla died at all too young of an age, while in the hospital. Priscilla was married to Nick Nicholson.

At the December 9, 2019 quarterly meeting The Family Health Center of Worcester, Inc was awarded $15,000, specifically for their program called, Healthcare for the Homeless Families Program. This organization has been in existence for 30 years and “is dedicated to improving the health and well-being of all residents in the Greater Worcester area. “ The Healthcare for Homeless Families program is the ONLY program in Worcester to provide comprehensive access to healthcare for homeless family members of all ages. These services are available regardless of one’s ability to pay or not. This program assists the most vulnerable families in the Worcester community by providing lots of wrap around services, such as medical screening, primary care, behavioral health counseling, substance use disorder treatment and advice about different healthcare benefits. In addition, translators are available for many different languages.

Since there is an unfortunately high rate of trauma and violence within the homeless family community, this program gives a lot of support to families as they make progress on the path to stability and self-sufficiency.

The Daniels Foundation is glad to help any organization in Worcester that helps people recover from a sadly disastrous and unhealthy situation to a life of stability and self-sufficiency.

I recently had the chance to interview James Morse, 4th generation board member. Please read about why he is a good guy to have on your side and is well suited for the position of Clerk on the board.

Laura (LR): Tell me a bit about your career track.

James (JM): I’m now on my “second” career as an attorney. I had worked my way through college as a “Summer Cop” on Martha’s Vineyard. After finishing college, I stayed on the island through the fall working as a police officer part time and doing other jobs (renting cars, construction). I earned the opportunity to attend the police academy that winter and was hired as a full-time police officer the following fall. It was a good career that allowed me to complete Law school as well as my Masters Degree while working full time. I am fortunate since I did not incur massive student debt as a result of my simultaneous full employment. Although I have been licensed to practice law for 14 years, I have been actively practicing for 13 months. For the first 13 years my legal practice was part time and did more teaching criminal law, criminal procedure and labor law at the various police academies and around the state. Law enforcement was an interesting 24 years and left me with a great deal of experience to draw on now that I am practicing law full time. I find it much easier to communicate with clients who are having difficulties. My life experience helps us relate to each other. Going forward I hope that my practice will continue to grow, and I hope to be a Judge in 10-15 years. I found a love for teaching.

LR: What is your family line connection?

JM: I am from the Harold line and his son Bruce G. Daniels was my Grandfather. Bruce’s children include Fred, my uncle and Sarah (Daniels) Morse, my mother and older sister to Fred as current board member.

LR: How long have you been on the board?

JM: This is my 8th year on the board. I currently serve as the Secretary/Clerk responsible for keeping the minutes and records of the meetings.

LR: Did you feel like you knew a lot about the board before joining?

JM: Growing up I was aware of the Foundation but was not sure what it did. I just remember my mother leaving Connecticut, where we grew up, to go to Worcester several times a year. When I was in boarding school in Massachusetts the Foundation’s December meeting was often open for non-board member attendance. I would get to Worcester in time for the end of the meeting and if the timing worked out, we ended up at the Worcester Club for dinner with Grandma, Granddaddy, Uncle Fred and my Mom.

LR: What is your favorite thing about being on the board or is there a memorable program you have seen funded?

JM: First, being able to connect with family. Second, since we now are beginning to have data on our “Strategic Grants” it is nice to see the impact that some of the programs seem to be having with our focus and as a result of our funding. It was rewarding to see that despite being the second largest city in Massachusetts, Worcester is not on the top 10 for highest rates of teen pregnancy.

LR: What is something you want people to know about you?

JM: I will give you three
1) I am at times an encyclopedia of mostly useless knowledge about movies, or trivia. LOL. It comes from reading too much. In seriousness
2) I am a service/civic related person. My first career was in service. In addition to being a police officer, I served as a volunteer fireman and EMT for 20 years. Now that I’m retired from public safety, I continue to serve on municipal boards as an elected Town Meeting Member in Falmouth and on the Zoning Board of Appeals.
3) I am very involved in the Freemasons (as were many of the G1 and G2 members of the Foundation). I served as the Deputy Grand Master (Executive Officer) of the Grand Lodge of Massachusetts in 2013.

LR: What is your favorite thing to do in your free time?

JM: Riding my motorcycle around Cape Cod. Nothing clears my head of any stress faster.

LR: What is your least favorite thing to do around the house?

JM: Mopping tile floors. It is necessary to keep a clean house but it’s a DRAG and I avoid it until I can’t stand looking at them.

LR: Thank you for taking the time to let us get to know you better James!

Sorry, the comment form is closed at this time.

FIND OUT MORE ABOUT APPLICATION DEADLINES AND CRITERIA
see more